Marcus Smart is the most disliked Celtic and that's a compliment 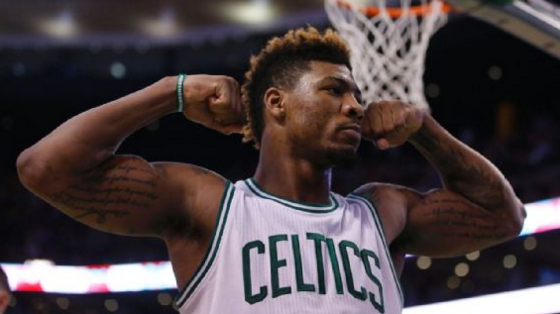 Back in the Kevin Garnett Era, it was well known that players and fans around the league were not privy to KG's antics on the court. The floor slapping, chest pounding, constant snarling and growling grew old on hoop junkies outside of Boston. But we as residents of Beantown ate it up like a bowl of clam chowda. Today, this current core of C's are a likable bunch. A group of blue-collar ballers, some of which were castoffs under previous employers, who fight and scarp every night for respect and more importantly points and defensive stops. But with every team there are a few guys that the opposing players can't stand. According to Jae Crowder that guy for the Celtics is, of course, Marcus Smart:

Crowder was informed that he, Smart are competing to be most disliked Celtic: "I think Marcus edges me a little bit. Guys don’t like Marcus"
— Jay King (@ByJayKing) February 26, 2016

You have to appreciate Crowder's remarks. As someone who roots for a particular team, you want a guy like Smart on your side. Hell give me five Marcus Smarts and I will be happy (Okay, hopefully one of the Smart clones could shoot a higher percentage). C's analyst Brain Scalabrine has nicknamed Smart the cobra, and has mentioned numerous times how he would hate to be an official when the second-year Celts point guard is on the court. The aggressive defense, diving for loose balls, and yes the flopping can test any official, opposing player or fans' patience. Even that hairstyle can annoy some people. All this is a factor in why the people of Boston admire Smart's game. He is the closest thing to KG we have seen in a while, especially when it comes to the defensive side of the floor, and he seemingly gets under the other teams skin worse and worse as the season drags on: Never change Marcus, never change. Photo Credit: David Butler II/USA TODAY Sports
2/27/2016 10:57:00 PM
Share
Newer
Older
Follow @teamboston