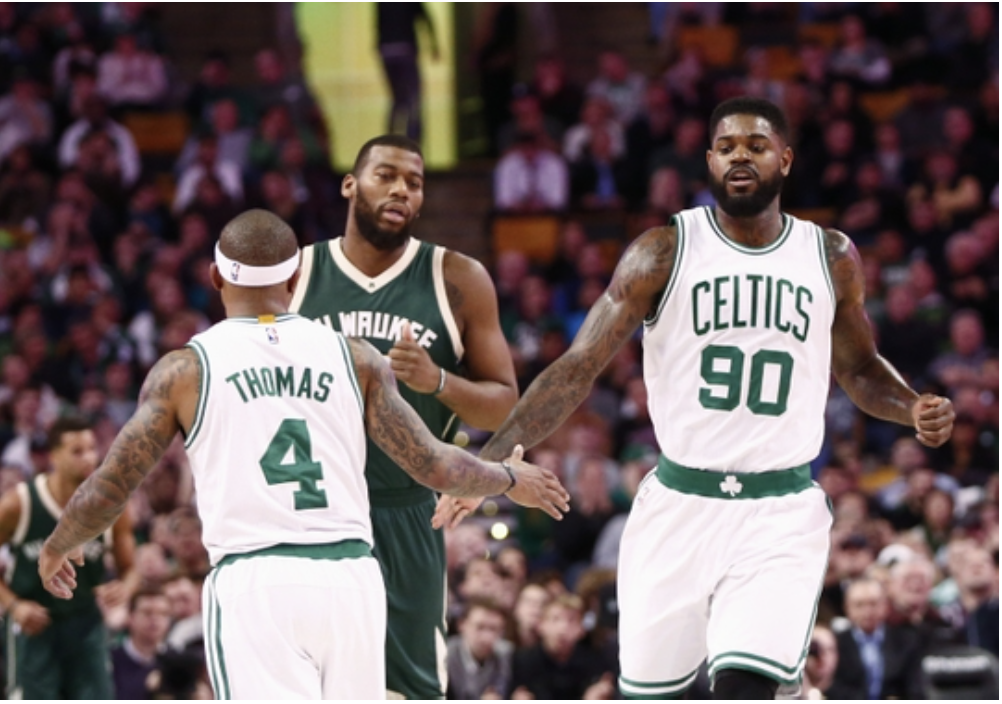 The Boston Celtics rebounded from an unimpressive 1-2 Western Conference road trip with a 112-107 home win over the Milwaukee Bucks tonight. The win marked their ninth straight win at the TD Garden, the team's longest such streak since 2011. This win also avenged the team's Feb. 9 loss at the buzzer in Milwaukee. All five Celtics starters finished the game with at least 14 points. Jae Crowder continued his hot shooting to start off the game. After scoring a career-high 27 points in the loss to the Minnesota Timberwolves on Monday, Crowder scored seven of the team's first nine points on 3-3 shooting. While the Bucks got off to a slow start from the field, the C's were making a concerted effort to get out and run the floor. Not only was Boston running off of missed shots and turnovers, they were also moving the ball quickly up the floor off of made baskets. Amir Johnson made an early impact for the C's in the form of nine points, seven rebounds and two big put-back dunks in the first quarter. Crowder continued his hot start throughout the first quarter, finishing with 14 points to help the Celtics to a 35-25 lead. The C's started out the second quarter on a 11-4 run to extend their lead, highlighted by five-straight points from Avery Bradley. The Celtics continued to run the Bucks out of the gym in the second quarter. With just over seven minutes to play in the half, Tyler Zeller beat Greg Monroe down the floor for an open layup, the embodiment of the up-tempo play that Boston was focusing on all game. Despite shooting 55.5 percent from the field in the first half, the Celtics were not able to extend their first quarter lead before the break. Going 0-9 from three-point range and having 14 turnovers hurt the C's and allowed the Bucks to stay within striking distance. The defense was better in the first half, but there were still too many easy looks for Milwaukee. The Celtics went into the halftime break leading 62-52. The Celtics stormed out of the locker room on a 11-3 run to open up the second half, en route to their largest lead at 73-55 with just over nine minutes to go in the third quarter. After Brad Stevens left Crowder in the game with four fouls, he quickly picked up his fifth, along with a technical foul, and the Bucks cut the Celtics' lead back down to 10. The Bucks were able to cut the lead to single digits a number of times early in the fourth quarter and even down to just five points with just under six minutes left in the game. Just when it looked like the Bucks may close the gap, Isaiah Thomas decided to take over the game and make sure the Boston crowd went home happy. A quick seven points opened the lead back up to 11, but the Bucks would not go away quietly. A beautiful behind-the-back, cross-court pass from Thomas to Crowder for a corner three closed the door. Thomas finished with 27 points and seven assists, Crowder added 20 points and eight rebounds, and Jared Sullinger notched another double-double with 14 points and 10 rebounds. Jabari Parker had 22 points for the Bucks and Monroe had another big night with 20 points and seven boards. #my-div { width : 400px; height : 200px; overflow : hidden; position : relative; } #my-iframe { position : absolute; top : -100px; left : -100px; width : 1280px; height : 1200px; } Here you have one DIV with dimensions 400x200px. Now by moving the IFRAME within it you can position it on the right place.
2/27/2016 10:55:00 PM
Share
Newer
Older
Follow @teamboston